St. Francis is one of the most well-known religious figures in Roman Catholic history. He started the Franciscan orders, The Poor Clares, and The lay Third Order. People recite the prayer of St. Francis novena to ask him to help them find peace, holiness, and strong faith.

He is the saint who looks out for Italy, the environment, and animals. He is also the protector against dying alone, fire, families, peace, and people who make things with needle and thread. He is the patron saint of many dioceses, including Italy, San Pawl il-Bahar, Malta, Freising, Germany, Lancaster, England, Kottapuram, India, Metuchen, New Jersey, Quibdó, and Colombia.

O divine Master, grant that I may not so much seek
to be consoled as to console,
to be understood as to understand,
to be loved as to love.
For it is in giving that we receive,
it is in pardoning that we are pardoned,
and it is in dying that we are born to eternal life.
Amen.

St. Francis of Assisi was born to Pietro di Bernardone dei Moriconi and Pica de Bourlemonthe in 1181 or 1182 in Italy.

As a child, St. Francis is remembered as a happy, charming, and young leader. He lived a rich and very easy life before becoming a soldier and serving his country. He wanted glory and honor, and when Assisi went to war with Perugia, he finally got the chance to get them.

Before the war, St. Francis had a dream in which God told him to go back because he was making the wrong choice. St. Francis listened to what God said and left the war to pray and cry for his sins. With God’s help, St. Francis realized that nothing is more beautiful than God’s love.

St. Francis saw visions of God and was told to repair the church of Sam Damiano in his prayers. St. Francis had no help and had to lie to his father by selling fabrics from his father’s shop and using the money to build the church. When St. Francis’s father found out why he was doing what he was doing, he took him to the bishop and asked for the money back.

St. Francis gave back every penny he had and left his early life to go back to the woods. There, he prayed to God and built the Sam Damiano Church with his own hands. When it was done, St. Francis began to preach about the second coming of Christ and obedience to the Church.

People say that St. Francis loved nature, and one of his most famous sermons is where he talks to hundreds of birds about the deeds of the Creator, their independence, and how much God cares for them. St. Francis got sick and died on October 4, 1226, when he was 45 years old.

God has given me the gift to read the signs, interpret the dreams, decode the angel numbers since birth. Through rigorous practice and application, my gifts have been fine-tuned. Now, I use my gifts solely to help those distressed souls who have lost all hopes, those who have been left alone to fend for themselves, those whom the system doesn’t care anymore, those whom the mainstream science has ignored.

Litany of the Sacred Heart of Jesus 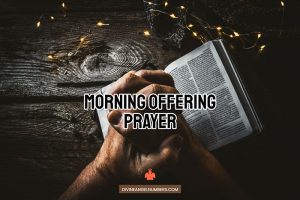